The destruction of a champion: Atlanta #Hawks go from contender to pretender 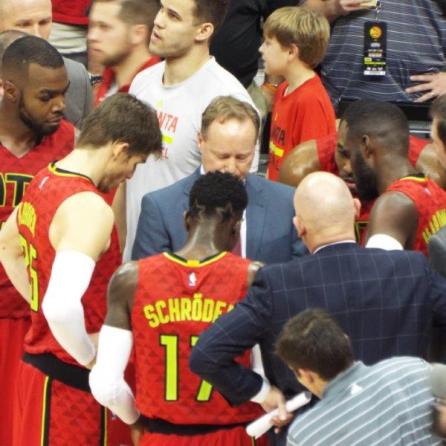 In the 2014-15 regular season, the Atlanta Hawks were one of the best teams in the NBA winning 60 games, and reaching the Eastern Conference finals for the 1st time in team history. So after such a great season you do what you can to shore up your holes and try again in 2016. Right? Wrong. The Hawks dismantled the team over the next 2 years. First Demarre Carroll gone to Toronto as a free agent after he claims Atlanta didn’t even make him an offer. Next Al Horford signed with Boston after negotiations were mishandled by Hawks brass. Jeff Teague traded to Indiana for a 1st round pick which became Taurean Prince. Kyle Korver to the Cavs for a 2nd rounder. (We will see over time how these picks pan out.) Since that time the team has been on steady decline each year. In 2016-7 they finished 43-39,  twice having 7 game losing streaks.

As much as I like the players, coaches, and team executives some hard questions have to asked and answered. Role players Kent Bazemore and Denis Schroder both were signed to big $70 mil plus contracts after teasing us all with some great play in the 2016 season. Denis has showed signs he was signed to

Dwight Howard is brought in as free agent, but in late in games is played sparingly.  First. Why you do bring a low post big man when the league has switched over to a outside shooters league? If you do bring him in why aren’t more plays run to take advantage of his FG shooting of over 60% ? Rebounding and scoring were all up from his last year.  Even his FT shooting was better. At first all went well. Atlanta used a 2 tier offense. Start games off by pounding ball inside to Dwight Howard, then bringing in the smaller 2nd unit to attack with slashing drives and outside shooting. It worked. They opened the 2016-7 season with a surprising 9-2 record and thoughts of a possible deep playoff run.

But as opponents adjusted, there seemed to be no real counter by the Hawks. The team’s hallmark became inconsistency.  Wins over top teams like Cleveland and San Antonio, Boston were offset by strange losses to bad teams like the Nets. Kent Bazemore, who signed to a huge contract before the season played worse than last year. Denis Schroder although improved still was a bit erratic and like Howard found himself on the bench during critical times of games.  During the last part of the season and playoffs key defender Thabo Sefolosha saw little or no minutes.

All of these things made you wonder is the team being run with winning being the No. 1 priority .  Unexplained benching of players, constant trade talk being leaked to the media all created a sense of disloyalty and dysfunction on the team.  It is up to management to put together a team,  coaches to create a scheme/plan to put the players in the best position to maximize their skill sets, and players to play with relentless effort and energy.

The Hawks need to have everyone stay in their lane and ‘do their job’ in order to be a winning franchise.